This weapon was traditionally a barge pole, that was longer than 10 ft, and used to steer river boats.

It was Introduced to the Wing Tsun System by Leung Yee-tai,(梁二娣), during the Redboat era of Wing Tsuns history, who taught it to Wong Wah-bo in exchange for being taught the empty hand system of Wing Tsun.

It is now known when the Bart jan were introduced into the Wing Tsun system.

Although traditional weapons have no practical value in terms of application and WTA focuses on contemporary weapons, traditional weapon training can enhance various aspects of a students empty hand skills, can be enjoyable to learn, benefit health and fitness and appeal to those that enjoy the beauity and practice of the Wing Tsub system.

Traditional weapons forms are offered, at the senior level, after completing the Wooden Man and Biu Jee forms. 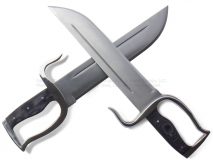